Pseudomonas, Cryptosporidium, Legionella…What Germs Lurking in Swimming Pools and Spas Should you Watch Out for?

In midsummer, particularly during heat waves, people flock to public swimming pools and spas throughout the Western hemisphere. Overcrowding leads to higher concentrations of microbes of all kinds, against which chlorinated treatments are not always fully effective. While most infections caused by these pathogens are harmless, they can sometimes lead to serious outbreaks. What microorganisms do we inhale or ingest when swallowing spa or pool water and how dangerous are they?

Cryptosporidium is a parasite frequently found in swimming pools.

Its high tolerance to chlorine is due to its protective shell which allows it to survive for 7 days in a pool water treated with chlorine (1 ppm minimum).

It causes diarrhea and all the associated symptoms (headache, dehydration …) while Norovirus and Shigella can make swimmers sick with acute gastroenteritis.

Some virulent strains of E. coli are also responsible for the occurrence of gastroenteritis, but also urinary tract infections, meningitis, or sepsis

Among the other infections, Pseudomonas aeruginosa is generally harmless except in immunocompromised patients where it can cause various urinary, cutaneous, pulmonary, eye infections …

Legionella pneumophila is responsible for disorders such as Pontiac fever but can also cause a fatal pneumonia, especially in immunocompromised patients, the elderly as well as young children.

What individual practices can help reduce the risk of infection?

A number of recommendations can be applied to avoid risks such as :

They must perform tests several times a day to detect any unusual concentration of pathogenic microorganisms.

In addition to the aforementioned germs, pathogenic staphylococci, mycobacteria and amoebae should be investigated in water.

Continuous treatments are not enough to eradicate all germs from swimming pools. However, awareness of good practices has helped stop the progression of infections caused by Cryptosporidium.

Increased risk of legionella in hot tubs and spas, especially in hotels

High temperatures in hot tubs allows bacteria to thrive and constant water agitation may cause the evaporation of a certain amount of disinfectant.

As more people use spas, the amount of organic matter such as sweat, dead skin or urine tend to exceed the neutralization capacity of treatments.

Bubbles generate aerosols and if water is contaminated with legionella, human infection by inhalation becomes possible.

This supports the findings of a 2018 study based on 1,079 cases of Legionnaires’ disease in European spas that showed that 10 out of 22 outbreaks originated from hotel settings.

Special regulations and guidelines in terms of legionella monitoring

In addition to pool basin water, the major risk points in terms of legionella proliferation in swimming pools are located in showers and whirlpools.

Facility managers have a major preventive role in this regard: they must ensure that the concentration of legionella in domestic hot water systems does not exceed 1000 CFU/L at all points in the network.

In addition, it is necessary to carry out regular water analyses and ensure that the hot water exceeds 50 °C throughout the system to prevent legionella proliferation.

Penalties may arise in case of risk management negligence and the facility may be closed by authorities in the event of a positive control.

Today, legionella is the most alarming germ in swimming pools and spas as it is difficult to get rid of in the long term.

A 2019 European study based on 357 hotels that implemented corrective measures following a positive diagnostic to legionella showed that 25% of them had at least one new case of legionellosis in the two following years. 42% of these were located in  Italy, 17% in Spain, 14% in France and 7,6% in Greece.

Compliance with regulatory requirements is not sufficient to effectively control the risk of legionella proliferation.

Rapid detection kits that can be used by any facility manager allow for optimal responsiveness and ability to adapt treatments depending on the actual concentration of legionella in water.

They also enable a multi-year tracking so users are able to timely adjust maintenance patterns upon early signs of proliferation and avoid widespread colonization. 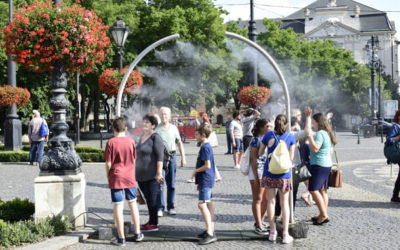